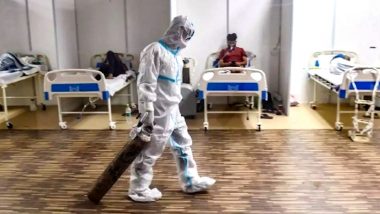 India is descending on India from the intense shock of the second wave of the Corona epidemic. Meanwhile, people are still dying due to its lack of demand for improved oxygen supply in the country. The latest case is from Goa, where 15 people died between 2pm and 6pm on Thursday due to lack of medical oxygen at a government hospital. The Goa government told the Bombay High Court that more than 15 patients with Covid-19 died at the Goa Medical College Hospital (GMCH) on Thursday, the report said. It is noteworthy that in this hospital, 26 days ago he died of coronavirus two days ago. Read also – Weather Forecast: IMD warns of cyclonic storms, heavy rains in South Konkan, Goa.

A Goa bench of the Bombay High Court said the state administration had told him that some of the deaths could be related to equipment problems, such as the supply of multiple cylinders with oxygen. Stress reduction (pressure). The court said 15 people died at the government hospital between 2pm and 2pm, despite an order to provide oxygen for the treatment of Kovid-19 patients at GMCH. The bench heard some petitions related to the death of Cochid-19 patient due to lack of medical oxygen.

The court said the central government should get the fixed oxygen quota in Goa as soon as possible. Currently, the incidence of infection in the state is increasing rapidly. Justice Nitin W. Sambre and Justice M.S. Sonak’s bench said that even after the May 12 order, the court has to file with great grief that today (Thursday) about 40 patients died due to Kovid-1 at GMCH. The court said about 15 of these people died between two in the morning and six in the morning.

Meanwhile, the Goa government on Thursday constituted an expert committee to ease the discipline of oxygen supply to the state’s top hospital, Goa Medical College Hospital. Indian Institute of Technology-Goa Director Dr. B.K. A committee has been formed under the leadership of Mishra to examine the adequacy of oxygen supply in the GMCH and the efficiency of the oxygen supply chain, to review and make recommendations for the improvement of the oxygen management process in the GMCH and to make recommendations to improve the full range of oxygen supply in the GMCH. Former Dean of GMCH, V.N. Jindal and Urban Development Secretary Dr. Tariq Thomas are members of the committee.

An order issued by Revenue Secretary Sanjay Kumar said the committee has been asked to complete the work within the next three days and the health secretary has also been directed to provide necessary assistance to the committee to complete the work on time. It is noteworthy that at least 2991 more people were infected with the coronavirus in Goa on Thursday and 633 patients died of the infection. An official of the state health department said this. In Goa, 1,93,737 people have died so far due to Covid-19. There are currently 32,953 active cases in Corona in the state.