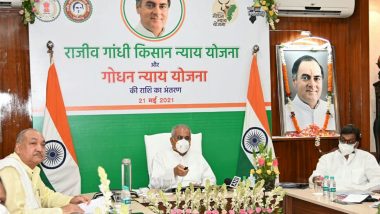 On the occasion, Chief Minister Bhupesh Baghel also transferred Rs 7.17 crore to the 2,000 villagers and livestock owners for the dung sold in Gothan between March 15 and May 15 under the Godan scheme. The Chief Minister introduced Super Compost Fertilizer produced in Gothan for sale to the farmers. On this occasion, he also inaugurated the beautification work of the idol site at Rajiv Gandhi Chowk in Raipur. All district MLAs, including MP PL Punia, district panchayat presidents and other people’s representatives, took part in the program.

In his message sent for this fund transfer program under Rajiv Gandhi Kisan Niya Yojana and Godan Roy Yojana, MP Sonia Gandhi led by Chief Minister Bhupesh Baghel along with Annadata to improve the economic condition of the common man is working hard to bring prosperity to farmers and their lives. Describing the Rajiv Gandhi Kisan Nyaya Yojana as a commendable step in the interest of the farmers, he congratulated Chief Minister Bhupesh Baghel and his cabinet ministers. In her message, MP Sonia Gandhi said that the late Rajiv Gandhi’s idea was always to empower the peasants, workers, the poor and the backward economically. On the occasion of his death anniversary, the Chhattisgarh government is paying true homage to the villagers and farmers by helping them.

Today, the former Prime Minister. On the occasion of Rajiv Gandhi Zia’s death anniversary, Rajiv Gandhi has planned to transfer Rs 1,500 crore in agricultural input assistance (input subsidy) to 22 lakh farmers in the state as the first installment of the 2020-21 kharif season in their bank accounts under the Kisan Niyay. # In Kisankoana pic.twitter.com/pY1QjsiAw9

Chief Minister Bhupesh Baghel said that agriculture in the state has improved as input subsidy has been given to farmers in the state under the Rajiv Gandhi Kisan Roy scheme. The government has also expanded the scope of this project from the kharif season of 2021. This includes paddy as well as other kharif crops. On this occasion, Chief Minister Rajiv Gandhi gave detailed information about the provisions of Kisan Niya Yojana 2022 and said that a certain amount of money has been included in the budget for 2022-22 years to provide landless workers under this scheme. Every year. On the occasion, the Chief Minister took detailed information about the measures taken by the state government to prevent the second wave of Kovid infection in the state, treat the victims and help the needy. The Chief Minister said that in two years his government has done significant work in the development of health facilities. On this occasion, he introduced the Mahottari Doolar Scheme implemented by the state government to provide free management and scholarships for free education of children for Kovid epidemic, coronary vaccination conditions, endowment and poor families of the society. . The Chief Minister said that in addition to waiving agricultural loans on farmers in the state, they were given an additional incentive of Rs 11,000 crore in the last two years.

Assembly Speaker Dr Charan Das Mahant and MP PL Punia said that the Chhattisgarh government has implemented the policy of the people by making promises to the poor and farmers in spite of adverse conditions. He lauded the welfare work of the Chhattisgarh government led by Chief Minister Bhupesh Baghel and congratulated the benefiting farmers and villagers. In his welcome address at the beginning of the program, the Minister of Agriculture and Water Resources said that the Rajiv Gandhi Kisan Roy Yojana is an important scheme for the farmers of the state of Chhattisgarh.

She spoke about the purchase of Gobar Vermi compost as well as the Super Compost Fertilizer and Livelihood Activities run by the Mahila Self Help Group under the Godan Naya Yojana. Choubey said that apart from Rs 7.17 crore, dung farmers are being paid a dividend of Rs 3.0.06 crore in self-help groups and Gothan Committees. So far, Rs 95.31 crore has been provided to cow dung sellers under the Godan Nyaya Yojana project. On the occasion, Health Minister TS Singh also expressed his gratitude and said that the Chhattisgarh government under the leadership of Chief Minister Bhupesh Baghel was carrying forward the thoughts and determination of the late Rajiv Gandhi, the former Prime Minister.