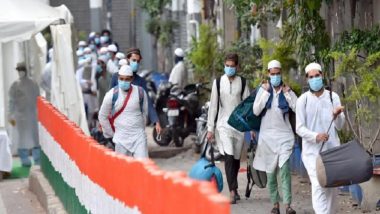 Tirupati: Damodar Reddy (226) died at Kovid-19 at SVIMS Hospital in Tirupati and there was a risk of infection that his family and relatives did not come forward to perform the last rites. However, a group of Muslims performed the last rites of Damodar according to Hindu tradition. A similar incident took place at Ruia Hospital when a pastor of a church, Veti Dashu, died of covid, none of his relatives came to pick up the body, and it was confirmed that the same Muslim group came to the hospital again and took the body. The last rite according to Christian rites.

Remember that last year there was a hate campaign against Tablighi Jamaat, where Jamaat members were convicted of spreading Kovid-19. However, these issues had no effect on the Muslim group and in the city of Andhra Pradesh, the members of this Muslim religious organization are burying the victims of Kovid-19 without seeing anyone’s religion. Under the banner of the Covid-19 Joint Action Committee (JAC), ers0 volunteers belonging to Tablighi Jamaat have buried the bodies of 530 Covid victims since the outbreak last year. Read more: Coronavirus: Those involved in Tablighi Jamaat deficit are being shifted to hospitals and quarantine centers

They are not only performing the funeral of the unclaimed corpse, but also ensuring the funeral of such people, whose families left their loved ones for fear of infection. JAC President Shaikh Imam Sahib told IANS that he performed the funeral rites according to the religious beliefs of the victims. “If the deceased is a Hindu or a Christian, we use them to perform the last rites of service to the priest or relative,” he said.

Imam believes that this is an opportunity for Jamaat to react with hatred. “We are responding to their hatred with love, compassion and humanitarian service,” said Imam, an advocate in the Andhra Pradesh High Court. We believe that Almighty God has given us this opportunity. He recalled how the Tablighi Jamaat was misrepresented last year after holding a Jamaat in Delhi. Imam said he also called Jamaat members terrorists. Today the same Jamaat members are performing the last rites of the victims of Kobid.

A group of Muslims formed the Tirupati United Muslim Association in 2014 to carry out relief work during natural disasters. After the epidemic broke out last year, it formed the JAC and requested local authorities to allow them to bury the victims according to their religious beliefs.

The JAC works under the direction of city ulama or Muslim religious leaders. The top leaders of the party are Maulana Ibrahim Hashmi, Hafiz Ishaq Mohammad and Maulana Jaber. Imam said the jack received Rs 20 lakh in the form of a public grant. We bought a new ambulance. We now have two ambulances, providing free services.

He also thanked Tirupati MLA Karunakara Reddy for all the support to JAC. Reddy, the leader of the state’s ruling YSR Congress party, has given some financial support to the organization. Despite Kovid being positively tested twice, MLA MAC has personally attended the funerals of some of the deceased along with JAC members. JAC is now planning to expand its activities by providing free oxygen cylinders to Kovid patients.