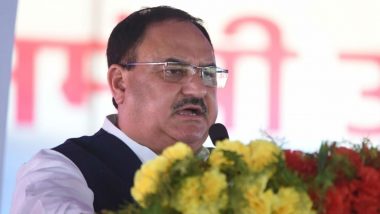 New Delhi: The BJP is busy preparing for assembly elections in five states next year. On Saturday, BJP national president JP Nadda and the party’s general secretary and presidents of the party’s various fronts will hold a ministerial meeting with the organization and five state elections will be held in 2022. During the meeting which was going on from 11 am to 5:30 pm on Saturday, all the general secretaries of the party were present at JP Naddar’s house. The in-charges of all the states will also be discussed at JP Naddar’s house on Sunday. UP Assembly Election 2022: BJP central leadership shuts down speculation in Uttar Pradesh, backs CM Yogi Adityanath.

On Saturday, the BJP took stock of its activities on the ground during the second wave of the epidemic and decided to re-energize its workers ahead of next year’s five assembly elections. Assembly elections are scheduled for early next year in Uttar Pradesh, Uttarakhand, Manipur, Punjab and Goa. Elections will be held in Gujarat at the end of the year.

After the meeting on Saturday, JP Nadda and General Secretary of the organization BL Santosh met Prime Minister Narendra Modi. According to reports, both the leaders have responded to the Prime Minister on behalf of the party organization.

The BJP is fascinated with the upcoming elections. The BJP is working on a strategy to strengthen its base for next year’s assembly elections through the work of ‘Seva Hai Sansthan’. The opposition is attacking the BJP for all the problems it faced during Corona’s tenure. The BJP leadership is also well aware that their image was tarnished during the Corona period, especially in the second wave of Corona. Now the team is developing strategies to develop its own image.