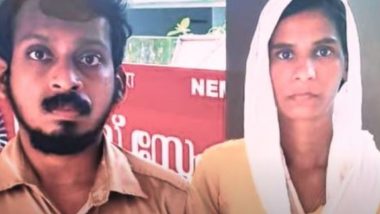 The man hid his girlfriend in his house for 10 years (Photo credit: YouTube)

A shocking incident has come to light from the village of Ailur to the pastoralists of Kerala. A 34-year-old man reportedly hid his 28-year-old girlfriend in his home for about 10 years, but none of his family members were surprised. It is said that the girlfriend left her parents’ house and spent 10 years in a small house with her boyfriend and no one was aware of it. The house was such that it could be locked from inside and out. The woman only came to bathe in her own house.

Reham is said to have disappeared from the house three months ago. On Tuesday, when his brother saw him, the whole thing could be revealed. Rahman described his own past when police intervened. After that, the man and his girlfriend were produced in court, where the woman said she wanted to stay with her boyfriend, after which they were released. According to Nanmara police, Mohammad Gani’s son fell in love with a girl named Sajita, a resident of Rehman Para. Fearing opposition from family members, Sajita left her home on February 2, 2010, after which Rehman hid her in his house and the man’s parents were unaware of it. Read more: Shocked! To win the lottery, the girl made a sacrificial pact with the devil, brutally killing two sisters

Apart from his parents, his sister also lived in Rahman’s house. However, after Sajitha left home, her family members filed a missing person case with the police 10 years ago and in this case the police interrogated many people including Rehman. About ten years later, on March 20, 2021, Rahman’s family members filed a missing son report with the Nenmara police station, and on Tuesday his brother saw him traveling in a two-wheeler in the town of Nemmara.

Rahman’s brother then sought the help of some policemen who were inspecting nearby vehicles, after which the police stopped Rahman and took him to the police station. Rahman told police he had been living with his girlfriend in a rented house in Bithunasesi for three months. Sajita was later called to the police station, where Rehman told her story during interrogation. Police say Rahman hid his girlfriend in his house so that he could treat his parents strangely, so that they would feel that he was suffering from depression. Police say Rahman did not like the way he came near his house.