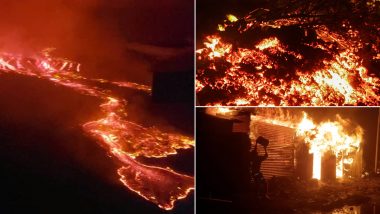 New Delhi: Officials and eyewitnesses said Congo (Congo) A volcano near the town of Mount Goma, Mount Niragango erupted on Saturday. After which the lava flowed into the villages here, causing the destruction of more than 500 hundred houses here. The death toll rose to 32 on Monday, said Joseph Makundi, head of civil protection in North Kivu province. New Zealand: White Island volcano kills 15, injures others

He said more than a dozen people were killed in various road accidents trying to escape the volcano. Many more died when the lava gripped them. Celestine Kasereka Mahinda, director of the Gomar Flavonic Observatory, said many people died from exposure to smoke and toxic gases emitted from the lava.

Mahinda said observation scientists could not properly warn the public about the possibility of a volcanic eruption. He said the volcano was still active and the tremors were being felt. Mahinda has now told people to be careful.

The United Nations Children’s Fund (UNICEF) said a volcano on Mount Niragango on Saturday forced about 5,000 people to flee the town of Goma and another 25,000 to take refuge in the northwestern town of Sak.

More than 1,170 children are missing after this natural disaster. UNICEF officials say they are camping to help unmarried children.

The volcano last erupted in 2002, when it was devastated. Hundreds were killed and more than a million were left homeless.