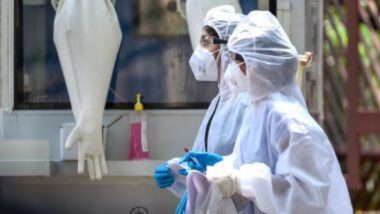 New Delhi: With the arrival of 1,32,364 new cases of coronavirus in the country in a single day, the total number of cases has risen to 2,7,74,350, and the recovery rate from the infection has exceeded 93 percent. Union Ministry of Health (Union Ministry of HealthAs of 8 a.m. on Friday, the death toll had risen to 3,40,702 after the death of 2,71 patients in the last 24 hours, and the number of people being treated on the fourth day was less than 2 million. Corona Update: In the last 24 hours, 1 lakh 32 thousand new corona cases have been registered in India, more than 2 thousand people have died.

The weekly infection rate has come down to .2.27 percent. The number of patients treated in the country has increased to 1,35,993, which is 5.733 per cent of the total infection and the national recovery rate from Kovid-19 is 93.06 per cent.

The number of infected people in the country exceeded 2 million in August-August last year, 3 million on August 23 and more than 4 million on September 5 last year.