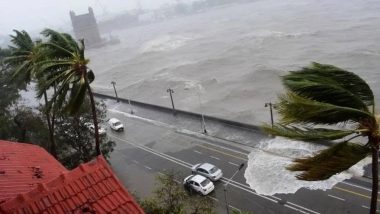 New Delhi: The Eastern Railway on Wednesday (May 2) canceled 25 trains between May 24 and May 29 after seeing cyclone Yas on the country’s east coast. Railways issued a press release on Sunday announcing the decision and also shared a list of canceled trains. Preparations are in full swing for the arrival of Cyclone Yas on the east coast of India

The Indian Meteorological Department (IMD) said the high pressure area in the Bay of Bengal was moving north-west and was intensifying towards the cyclone on the morning of May 24, during which a severe cyclone was formed. The next 24 hours. There is a possibility of taking. It will be growing and intensifying towards the north-west and on the morning of May 26, it will knock over the coast of North West Bengal and North Orissa near West Bengal. It is likely to cross North Orissa-West Bengal as a severe cyclone between Paradip and Sagar Islands by the evening of May 2.

Closed train cyclone ‘YAAS’ in some areas along the east coast will remain canceled as a precautionary measure. pic.twitter.com/DeAC2BQDgY

According to the IMD, the Andaman and Nicobar Islands will experience light to moderate rainfall in most parts of the Andaman and Nicobar Islands on May 24 and very heavy rainfall in some places. On May 25, light to moderate rains are expected in most parts of Orissa, with heavy to very heavy rains expected in some parts of the northern coastal districts. Prime Minister Modi has reviewed preparations for cyclone ‘Yas’

The forecast track and cyclone intensity are given in the following table:

At the same time, heavy to very heavy rainfall is expected in some parts of the state on May 2, Balasore, Bhadrak, Kendrapara, Mayurbhanj and some parts of North Orissa district – Jagatsinghpur, Cuttack, Jaipur and Keonjahar.

Deep despair over the East Bay of Bengal Hurricane ‘Yas’ intensified about 600 km from Port Blair. Intensify into a severe cyclone within the next 24 hours and a very severe cyclonic storm after 24 hours. pic.twitter.com/HfREdsMtOL