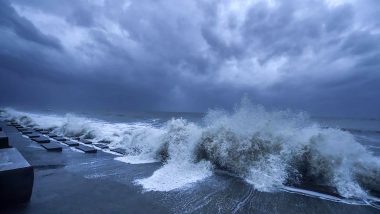 Kolkata: Cyclone Yas continues across Orissa and West Bengal. According to the India Meteorological Department (IMD), a cyclonic storm with winds of 155 kmph up till today (May) started with winds from Orissa-West Bengal between Paradip and Sagar Island, very close to Balasore north and south of Dhamra. 26) will cross. According to the Meteorological Department, the severe cyclonic storm is centered about 50 km south-south-east of Yas Balasore (Orissa). The land route process started around 9:30 am. Cyclone Yas: Bihar CM Nitish Kumar holds high-level meeting, prepares for cyclone Yas, warns and directs vigilance

It is said that cyclone Yas will have the biggest impact in Odisha, which is likely to cause landslides near Balasore on the border of Bengal and Orissa. More than three lakh people have been evacuated from low-lying and sensitive areas of Orissa.

About seven cyclonic storms centered around 0900 HRS about 500 km south-south of Balasore.land. pic.twitter.com/esPuoaECL0

However, state Chief Minister Naveen Patnaik said the cyclone was not a new phenomenon in Orissa. In Orissa, 52 teams of NDRF, 60 teams of ODRF, 206 teams of fire brigade and 60 teams of loggers have been deployed in ten coastal and adjoining districts.

Rains and strong winds are blowing in Orissa’s Bhadrak district; Dhamara is visual from the coastal region # Cyclonias pic.twitter.com/A63Sn3iCvZ

At the same time, the West Bengal government said it was trying to reduce the devastation caused by Cyclone Yas. More than 900,000 people have been evacuated from coastal areas to various cyclone camps, empty schools, colleges and other government places. Chief Minister Mamata Banerjee has said that the state government has drawn up a master plan for the three lakh people directly involved in relief and rescue work during and after the storm.

The Cyclone Warning Division of the IMD has forecast heavy to very heavy rains in some parts of Orissa on May 2. There will be heavy to very heavy rainfall in Jagatsinghpur, Kendrapara, Jajpur, Bhadrak, Balasore, Mayurbhanj, Cuttack, Henknal, Keonjhar and some other places in the state. However, heavy rains have been warned in Puri, Khurda, Angul, Deogarh, Sundargarh and several other places in the interior of northern Orissa on May 2.

# Clock | West Bengal: Barrackpore in North 24 Parganas has experienced a climate change, with light to moderate rainfall and wind.

‘Severe Cyclone’ # Cyclonias It is expected that the wind speed will reach 135-140 kmph by noon today. It can take a speed of 155 kilometers per hour. pic.twitter.com/xxbQXXLMs1

The meteorological department said dust storms and rains are likely between May 26 and 28 in many districts of eastern Uttar Pradesh due to the cyclone. On the other hand, on May 26, there is a possibility of lightning in Western UP. There may be light rainfall in western UP on 28 May and normal rainfall between 2 rainfall in eastern 28 May. Although in Assam and Meghalaya, May 26, light to moderate rainfall may occur in many places and heavy to very heavy rainfall may occur in some places.