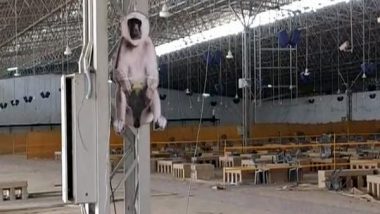 New Delhi: 18 May: The Indo-Tibetan Border Police (ITBP) has imposed a cut-out of langurs in and around the new 500-bed Sardar Patel Covid Care Center to combat the threat of monkeys. An ITBP source in Chhatrapur, Delhi, told ANI that a species of monkey from the Indian subcontinent has been planted at the premises of CVD-19 Care Center, an anchor cutter to prevent monkey terror. Sources said that in the last few days before the cutout was imposed, the SPCC had seen monkeys flying around, attacking the deployed personnel, especially the ones deployed in the PPE kit. Read more: 4,329 people have died due to covid in the last 24 hours in India, the worst figure so far

He said these cutouts are rotated around the new center every day so that groups of monkeys cannot assume that they are stable and original. The center, run by the Indo-Tibetan Border Police (ITBP), has started admitting patients. The SPCC, established during the first COVID-19 wave last year, was shut down after cases were brought under control.

Delhi: To deal with the risk of monkeys in the vicinity, Itbp_ficial Sardar Patel kept Babuun’s cutouts in the premises # Covid Care Center, Chhatrapur. These cutouts are randomly rotated to new locations across the center each day.#ReporterDear #Deli # Coronavirus | @Ajakkajitendra pic.twitter.com/7frf3hBIab

The Union Health Ministry on Tuesday reported 6,734 new covids, 10,918 recoveries and 340 deaths in the last 24 hours in Delhi. The ministry said the number of active Kovids in the national capital was 5,56,099. The death toll from COVD in the state has risen to 21,846 with the new death rate.