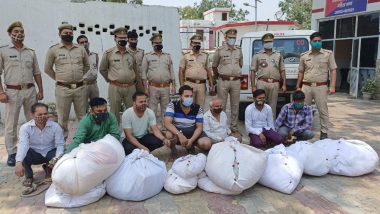 Lucknow: In a major move, Baghpat police in Uttar Pradesh (Uttar Pradesh) stole clothes from the bodies of the deceased from crematoriums and cemeteries and nabbed a group of resellers. The police took this action after the information of the informants. When the police found out their whereabouts, they raided and found a large quantity of stolen shrouds. After the raid they could flee from where the police were involved in the gang for stealing the shroud. John was arrested.

Police said they received information that some people had stolen clothes from the crematorium and cemetery and washed them first. After that, when the clothes were dry, they would press the clothes and pack them again. After that, Gwalior would sell them at exorbitant rates with the company logo on them. Read more: Madhya Pradesh: Newborn baby stolen from Maharaja Yashwant Rao Hospital in Indore, female prisoner on CCTV, FIR records