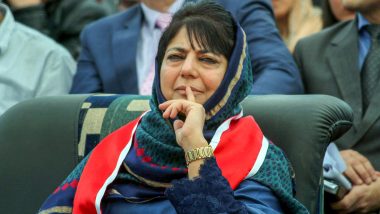 Srinagar: On Sunday, PDP president Mehbooba Mufti stressed that nothing could be achieved by killing political activists like BJP corporation Rakesh Pandita and said that such incidents only insult the people of Jammu and Kashmir. Pandita was shot dead by terrorists in Tral area of ​​Pulwama district on Wednesday. The Mufti told reporters in Anantnag district of south Kashmir, “It was unfortunate. We condemn those who killed him and nothing is gained from these things.”

PDP President Mufti said that in reality it defames the people of Jammu and Kashmir. He said the entire Union Territory would have to bear the consequences of such incidents. Asked about the possibility of the government conducting the Amarnath pilgrimage in the wake of the Kovid-1p epidemic, the former Jammu and Kashmir chief minister said the decision on the annual pilgrimage would be left to the central government. Read more: Three BJP workers shot dead in Jammu and Kashmir, terror attacks on workers and leaders increase

He lashed out at police over reports that a 15-year-old boy had been charged under the Unlawful Activities (Prevention) Act (UAPA) in the Bandipora area of ​​north Kashmir. The Mufti said, “They (the Center) do not listen to the people of Jammu and Kashmir. If they had listened, they would not have filed a case against the 15-year-old boy under the UAPA. They do whatever they want.”

He said, “On the one hand there are cobwebs and people find it difficult to get out of the house but on the other hand if they want to travel, who will tell them (not do it)? They make their decisions that make them happy, they do it.