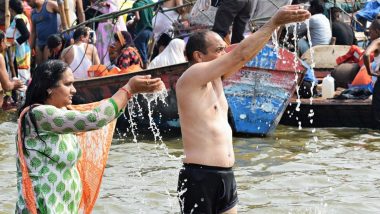 According to Hindu scriptures, Ganga Saptami is celebrated on the seventh day of Baishakh Shuklapaksh. This is very important in Hinduism. According to the mythology, on this day mother Ganga was immersed in Shiva’s journey from heaven. On this day mother Ganga is worshiped at the end of Ganga Puja. By doing this, all the desires of the person are fulfilled. According to the Padma Purana, the month of Baishakh is considered to be the month dedicated to Srihari, Lord Vishnu. Therefore, this month Lord Vishnu is worshiped in the Shodashopachar method. This year, Ganga Saptami is being celebrated on 18 May 2021, Tuesday. Read more- The greatness of the month of Baishakh! Why is it important to donate water this month? Find out what to do and what not to do this month!

The greatness of Ganga Saptami

In Hinduism, Mother Ganga is also considered as Papanashini and Mokshadayani. For this reason, bathing in the Ganges on the day of Ganga Saptami has special significance, but it is not safe to bathe in the river Ganga as there is a lockdown during the transition period of the Corona. In such a situation, after bathing, sprinkle a few drops of Ganga water on yourself. Then install the idol of Goddess Ganga in the temple of the house. If the idol of Goddess Ganga is not found, light a sun-lamp in front of the idol or image of Shiva. Now give sweets, sandalwood and white flowers to Shiva. While worshiping, chant this sacred mantra of Mother Ganga ‘Om Namo Bhagwati Parbatya Mili Mili Ganga Ma Pave Pave Swaha’. Pray to Gangaji and Shiva Shiva after Pujo. Next, donate clothes and food to a poor person.