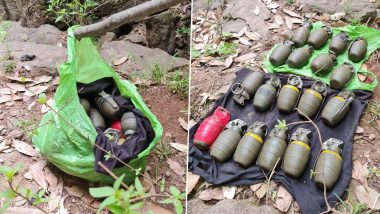 The State Rifles of the Indian Army and the Jammu and Kashmir Police launched a joint operation in the Fagla area of ​​Surankot in Jammu Punch after receiving precise input. The army received input that the terrorists were planning to target security forces on NH144A (Jammu-Rajouri-Punch Highway).

The terror conspiracy has failed

Jammu and Kashmir: In a joint operation, army and police recovered 19 grenades in Fagla General area of ​​Pooch district. pic.twitter.com/xdOcf64DoY

Explain that this is the second major incident of explosive attacks in the Jammu region in the last few days. On Saturday, security forces recovered a large quantity of arms and explosives from Chakarandi village in Doda district.

Earlier on Friday, three security personnel were injured in a militant grenade attack in Srinagar. One person was also injured in the incident. Militants hurled a grenade at security forces in the Naba Bazar area of ​​the city around 45pm.