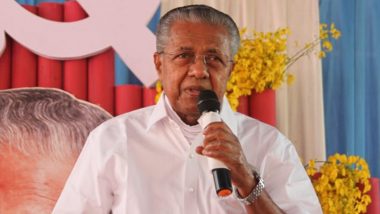 On Tuesday, senior CPI leader Pinarayi was elected leader of the Vijayan Party legislature. This paved the way for him to become the Chief Minister of Kerala for the second time in a row. At the same time, Health Minister K, who has played a key role in the fight against Kovid-19 in the state. Who Shailja (K. K. Shailaja) has been in dispute due to not getting a place in the cabinet. Vijayan’s coalition government will have 11 new ministers from the CPI-M quota, including his son-in-law PA Mohammad Riya. He is the national president of DYFI and it is believed that this is an attempt to include young faces in the cabinet. The CPI-M’s cabinet will have 12 members, including Vijayan. Among other elements of the CPI, four and one member of the Kerala Congress (M), which includes the LDF government, will be made ministers. ALSO READ-KERALA: Pinarayi Vijayan has resigned as Chief Minister, ready for another term.

Significantly, the 77-year-old Vijayan made history by winning the Left Democratic Front (LDF) for the second time in a row in the April assembly elections. Forty years later in the history of the state, there has been an incident where a front has won the assembly elections for the second time in a row. The alliance won 99 out of 140 seats. However, the debate over not including Shailja in the cabinet has started and many are angry. Internationally acclaimed Shailja for his efficient handling of the first wave of Kovid-19 in Kerala was immediately compared to the late KR Gauri Amma, when he surprisingly declined a place in the new cabinet. Hardline Marxist leader Gauri Amma was once considered a candidate for the chief ministership, but it never happened.

# Clock | Everyone worked hard in their departments. But that doesn’t mean I should just continue. There are many more like me, they can work hard too. It’s a very good decision: who’s who

But Shailja said he was not disappointed not to get a seat in the new cabinet. A section of the international media identified him as the ‘Rockstar Health Minister’. “There is no need to be sensitive. I became a minister first because of the party’s decision. I am completely satisfied with what I have done. I believe the new party can do better than me,” he said. No. I am happy that I have been able to lead the party. ” The party insisted that all new faces except the chief minister should be included in the cabinet.

The party’s state committee has nominated 11 new faces, including two women. Following the protocol of Covid-19, he will be sworn in on May 20 at the Central Stadium here. The state committee elected Vijayan as its leader at a meeting of the KG Center at its headquarters. There was a possibility that the victory of any outgoing minister would not get a place in the new cabinet, but it was hoped that Shailaj could also be given a waiver in this case. Shailja won the Kannur Matanur constituency with the highest margin of 90,9633 votes. During the election, the media also predicted her as the first female chief minister of the state in the future. However, keeping all expectations in mind, the leaders of various parties have expressed frustration that Shailja did not get a place in the new cabinet.

Retired school teacher Shailja did a great job in preventing the corona epidemic in the state last year. He also did a good job during the Nipah virus outbreaks in 2018 and 2019. People have reacted strongly on social media as Shailaja has not been given a place in the new cabinet. Her fans call her ‘Shaylaja Teacher’ or ‘Teacher Amma’. Social media users say it would not be good to make him a minister in the face of the second wave of corona epidemics in the state.

Some people expressed solidarity with him and posted his picture on WhatsApp in their DP, while others compared it to Gauri Amma’s alleged deprivation in the last moments of 1987. Gauri Amma was nominated as the Chief Minister during the election, but after the results were released, the party expelled her and allegedly chose EK Nayanar as the Chief Minister.

According to party sources, Shailja, Isaac and others have not been given seats in the cabinet for the second time in a row. Sources said the party wants to prepare second generation leaders in parliamentary politics and give them a chance. He further claimed that both the old and the young will get a chance in the new cabinet.

MB Rajesh was elected as the party’s speaker at a meeting of the party’s state committee chaired by veteran leader Elmaram Karim at the state headquarters of the Marxist Communist Party’s AKG Center. He got the third seat of CPI (M) from VT Balram of Congress. The CPI has already given a chance to a new face in the cabinet.

According to the CPI, newly elected MLAs K Rajan, P Prasad, J Chinchu Rani and GR Anil will be ministers in the coalition government on behalf of the party. He said the party’s senior leader and Adur C MLA C Gopkumar has been nominated for the post of Deputy Speaker of the Assembly. Bijayan had earlier said that a decision has been taken to form a 21-member government, of which CPI (M), CPI and KC-M have nominated 16 members today.