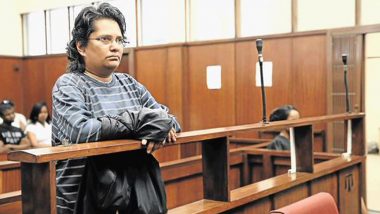 Johannesburg, June 8: A court in Durban has sentenced Mahatma Gandhi’s granddaughter to seven years in prison for fraud and forgery of Rs. On Monday, the court sentenced Ashish Lata Ramgobin (5). He was accused of cheating industrialist SR Maharaj. It is alleged that the Maharaja paid him Rs 2 lakh for importing a consignment from India and clearing the customs duty. It promised them a share in the profits.

Lata Ramgobin is the son of well-known human rights activist Ila Gandhi and the late Mewa Ramgobind. When the trial against Lata Ramgobin began in 2015, National Prosecuting Authority (NPA) Brigadier Hanguan Mulaudji said he had faked invoices to convince potential investors and provided documents that three lines of linen were coming from Indian containers. Lata Ramgobin was released on 50,000 bail. During the hearing on Monday, the court was informed that Lata Ramgobin had met Maharaj in August 2015, the director of New Africa Alliance Footwear Distributor. Read more: America and Pakistan: Positive discussion between the United States and Pakistan on the Afghanistan issue

The company imports, manufactures and sells clothing, linen and footwear. The Maharaja’s company also provides financial assistance to other companies on the basis of dividends. Lata Ramgobin told Maharaj that she had ordered linen in three containers for ‘South African Hospital Group Net Care’. Due to Ramgobin’s family and net care documents, the Maharaja entered into a written agreement with him for him. However, after learning about the fraud, he filed a criminal case against Lata.