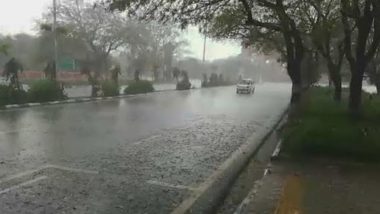 Thana / Palghar: Landslides and landslides took place in Thana and adjoining Palghar districts on Wednesday, the first day of the monsoon. Santosh Kadam, head of the Thana Municipal Corporation (TMC) Regional Disaster Management Room, said no casualties were reported in the incidents, but at least six vehicles were damaged when trees fell during heavy rains.

Besides, the boundary wall of two residential complexes in Savarkar Nagar and Manorama Nagar collapsed due to rains, Kadam said. No casualties were reported in the incidents. The district administration report said low-lying areas were flooded in many places in the districts of Kalyan, Dombivili, Ambernath, Badlapur and Bhiwandi in the district.

Meanwhile, low-lying areas of Mira-Vyander and Vasai-Birr were also reported to be flooded. Kiran Mahajan, chief executive officer of the Palghar Disaster Management Cell, said there were no major accidents with rains in the district. Authorities have suspended vaccination of Covid-19 in both the districts due to heavy rains in the coming days.