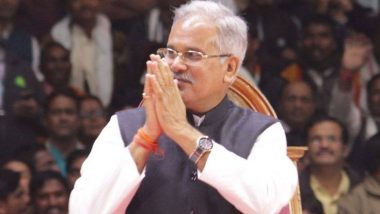 Raipur, 20 May 2021. The first installment of the kharif season will be provided by the Government of Chhattisgarh under the Rajiv Gandhi Kisan Roy Yojana (Rajiv Gandhi Kisan Roy Yojana) on May 21, the death anniversary of the late Shri Rajiv Gandhi, the former Prime Minister of India. (Input subsidy) will be provided. In addition, under the Godhan Act, about 1,200 cattle breeders in the state will be transferred to the Cattle Group Committees and women’s self-help groups at a cost of Rs 1 crore 1 lakh lakh and Rs 3.6 crore online in cow dung online. The event will be organized in the presence of MP Mrs. Sonia Gandhi and MP Mr. Rahul Gandhi through video conferencing. Read more – Chhattisgarh: Prime Minister Modi has spoken to CM Bhupesh Baghel about corona, requesting the Chief Minister to address the vaccine shortage.

The Chief Minister, Bhupesh Baghel along with his cabinet members will lay the first wreath on the oil painting of the late Shri Rajiv Gandhi at a function at his residence on May 21 at 12 noon, after which 22 lakh farmers in the state will first receive agricultural input assistance. From March 15 to May 15, Rs 1,500 crore will be transferred from cattle in installments and Rs 1.17 crore will be transferred online to farmers’ accounts. MPs, MLAs, other people’s representatives, farmers and cattle from the district will also be connected to the program through video conferencing.

It may be mentioned that the Government of Chhattisgarh launched the Rajiv Gandhi Kisan Roy Yojana on the occasion of the death anniversary of the late Shri Rajiv Gandhi, the former Prime Minister of India, on May 22, 2020 to promote crop productivity. State. Under this scheme, Rs. 52826 crore has been exchanged as agricultural input assistance to about 19 lakh farmers registered in the kharif season 2012-2016. The Chhattisgarh government has transferred this amount in four installments to the farmers’ bank accounts.

In an important meeting held on May 19 under the chairmanship of Chief Minister Shri Bhupesh Baghel, the Chhattisgarh government has taken many important decisions in the interest of the farmers. In which input subsidy will be given at the rate of Rs. 9,000 per acre for paddy purchased from farmers in Kharif year 2000-2111. Even in the coming rains, farmers producing paddy in kharif season will be given input subsidy at the rate of Tk 9,000 per acre per year.

Similarly, the government has further decided that in 2020-21, farmers who have sold paddy at support price, if it is kodo kutki, sugarcane, pigeon, maize, soybean, pulses, oilseeds, fragrant paddy instead of other protected paddy crops or planting trees , But they will be given an input subsidy of Rs 10,000 instead of Rs 9,000 per acre. Planters will receive this grant for 3 years. The state government has taken another important decision. Under which, in the kharif year 2021-22, besides paddy, farmers of all kharif crops like paddy, soybean, sugarcane, kodo kutki and arhar will be given input subsidy at the rate of Rs 9000 per acre. The Chhattisgarh government has set a minimum support price of Rs 3,000 per quintal for kodo-kutki.

On May 21, Chief Minister Bhupesh Baghel will transfer Rs 71 million directly to his account in the state of Chhattisgarh under the Multi-Level Cattle Breeding Justice Project from March 15 to May 15. And villagers. It may be mentioned here that a total of Rs. 8 crore 15 lakhs has been given to the cattle and villagers of the state under the Godhan Nyaya Yojana starting from the day of Hareli festival on July 20, 2020. With the Chief Minister Mr. Baghel formation committee and women’s self-help group 3. 3. Transfer crores of rupees.