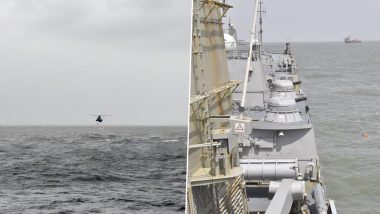 Barge P-305 sank late Monday night due to a severe cyclone. A total of 2,261 people were on board the barge at the time of the storm in the stormy Arabian Sea. The death toll from the Arabian Sea barge or oil rig tragedy is expected to rise further. There are many more missing people who are still being searched.

The central government has ordered an investigation into the tragedy. Late Wednesday night, the Union Ministry of Petroleum and Natural Gas directed the formation of a high-level committee to investigate the sequence of incidents of shipwrecks in and around the Bombay High Fields.

The unfortunate barge in the offshore developing area of ​​Bombay High Field sank late Monday night as the cyclone devastated the coastal areas of Maharashtra and headed towards Gujarat. ONGC is searching for the survivors of the ship, including Indian Navy and Coast Guard boats and helicopters.

177 people have been rescued so far.

Afzans Infrastructure Limited (AIL), which signed the barge, regrets the incident and says “we are focused on finding and rescuing the remaining missing workers on a priority basis, keeping our immediate focus.” “Our safety and well-being is our top priority, and we are doing our best to address this unprecedented crisis. We know we cannot compensate for the loss of a loved one, but we will do our best to support it,” AIL said.