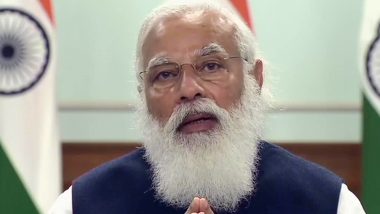 New Delhi, 14 May Prime Minister Narendra Modi on Friday said that the corona virus epidemic is now spreading rapidly in the country’s rural areas. He called on the people to wear masks and follow the rescue measures at appropriate distances. So far, about 2.6 lakh people have lost their lives in the country from Corona. Describing the Kovid-19 epidemic as an “invisible enemy”, Prime Minister Narendra Modi on Friday said the government was working on a war footing to tackle the second wave of the epidemic. He expressed confidence that the country would win this war. Addressing a program via video conference after the release of the eighth installment of economic benefits under the Prime Minister’s Kisan Samman Nidhi Yojana (Prime Minister Kisan), Modi said vaccines are a great means of protection against corona across the country, doseing more than 160 million people.

On the occasion, he appealed to the states to take strict action against those who have blacklisted drugs and oxygen. The Prime Minister said that under the Kisan Samman Nidhi, financial benefits of Tk 19,000 crore have been transferred directly to the bank accounts of 9.5 crore farmers. Bengal farmers are getting this facility for the first time. 1.33 lakh crore has been disbursed to the farmers so far under this scheme. During the Corona period, Rs 60,000 crore was distributed among the farmers. “I warn you all on behalf of Corona. The epidemic is spreading rapidly in rural areas. All governments are trying to stop it. As much as rural people need to be aware of this, the support of panchayats is equally important,” he said. We hope you will not be disappointed again. Wearing a mask and following the proper distance will take all measures to prevent this epidemic. Read more: Covid infection: The consequences of covid can be more serious in children – studies

He urged not to take the symptoms of the infection lightly due to the epidemic and to check it at the right time and treat it on the advice of a doctor. The number of Kovid-19 cases has risen to 2,40,46,709 after the number of coronavirus infections in the country was confirmed to be 333,144 in a single day, and the death toll has risen to 2,622,3117 after another 4,000 deaths. According to the Union Ministry of Health, the number of patients treated till 8 am stood at 37,04,963, which is 15.41 per cent of the total cases of infection, while the national recovery rate in Kovid-1 from 63.50 per cent. According to the data, the number of people recovering from the disease stood at 2,00,9,599 and the death rate from the infection was recorded at 1.09 percent. This time most of the new infections are coming from rural areas. The Prime Minister said, “After 100 years, such a terrible epidemic is testing the world step by step. We have a very invisible enemy in front of us and this enemy is also multi-faceted. That is why we have lost many people close to us.” Read more: Delhi Police questions IYC president Srinivas BV, Congress accuses Modi government of trying to block CVD-19 relief efforts

He said, “I am also feeling the pain that the countrymen have endured for some time and the pain that they have endured.” The stalemate that was involved was quickly being overcome and efforts were being made to work on a war footing. “The turning point is that the Prime Minister has urged people to get vaccinated and said that vaccines are a great means of protection,” Modi said. “The central government and all the state governments are working together to ensure that more people are vaccinated faster.” So far, about 180 million doses of the vaccine have been given across the country. He said that the country’s doctors, health workers, sanitation workers, ambulance drivers, lab workers have all gathered 24 hours a day to save lives. The Prime Minister said, “Today the country is working on a war footing to increase the supply of essential medicines.” Rapid oxygen plants are being set up and the three forces are also consistently playing their part in the fight against Covid.

“Oxygen Rail has given a lot of strength to Corona. These special trains are busy delivering oxygen to remote areas of the country. The drivers of oxygen tankers are working non-stop,” he said. “India is not a lost country,” he said, describing it as “inhumane” and described it as “inhumane” and called on state governments to crack down on such people. India will not lose courage, no Indian will lose courage. We will fight and win. Modi said the government has started providing free foodgrains to 600 million poor people under the Prime Minister’s Poor Welfare Anna Yojana so that no one’s house burns down in times of crisis. “I urge states to make every effort to ensure food distribution among the poor,” he said.