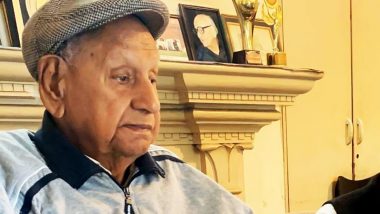 Amritsar, May 15: Raghunandan Lal Bhatia, a veteran Congress leader and six-time Member of Parliament from Amritsar, has died due to illness. He was 100 years old. Raghunandan Bhatia died at a private hospital here on Friday night and is survived by his son Ramesh Bhatia, daughter Saroj Munjal and younger brother JL Bhatia, family members said on Saturday.

He first became a Member of Lok Sabha from Amritsar Parliamentary seat in 1972 and later won elections from this seat in 1980, 1985, 1992, 1996 and 1999 on Indian National Congress ticket. Bhatia was also the Governor of Kerala from 2004 to 2006. He was also the Governor of Bihar from 2008 to 2009. He also served as Minister of State for Foreign Affairs in 1992. Read more: West Bengal: Governor Jagdeep Dhankar visits areas affected by post-election violence

As a senior member of the Congress, he held various positions in the party, including president and general secretary of the Punjab unit. Punjab Congress leader and MLA Raj Kumar Varka has expressed grief over the death of Raghunandan Bhatia and said that he was the ‘Bhishma grandfather’ of Indian politics.