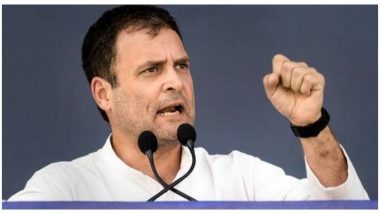 New Delhi: Congress leader Rahul Gandhi on Sunday said the central government was solely responsible for the flow of bodies into the Ganges and it was not a collective responsibility. He said the pain of those who had left the bodies on the banks of the river should also be understood and it was not their fault.

The former Congress chief tweeted, “I don’t want to share photos of corpses.” The whole country and the world is dissatisfied with this picture but they should understand the pain of those who were forced to leave the bodies of their relatives on the banks of the Ganges. It is not their fault. Read more: Tejaswi Yadav targeted Bihar and UP government after finding bodies in Ganges

I don’t like to share photos of corpses. The country and the world are saddened by the picture, but those who have been forced to leave their loved ones on the banks of the Ganges must understand the pain – it is not their fault.

Its responsibility is not only combined, but also the central government!

Gandhi’s remarks came after several bodies were found floating in rivers in Bihar and Uttar Pradesh in recent times. The Congress has been constantly criticizing the central government for tackling the Kovid-19 situation in the country.