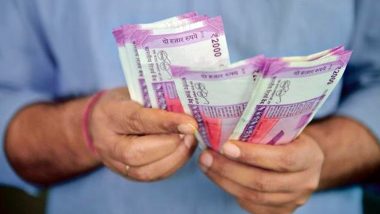 Seventh Pay Commission Latest News: In the wake of the coronavirus (COVID-19) epidemic, there is good news for central government workers. According to the update, the Union Ministry of Labor and Employment on Friday announced an increase in variable DA for central workers. The Centre’s move will benefit 1.5 workers in the central sector from Rs 105 to Rs 210 per month. This increase will take effect from 1 April 2021. It will also increase the minimum wage rate for employees and workers working in the central sector. Seventh Pay Commission: This is good news for government employees, this is a big decision regarding salaries and promotions.

1.50 crore employees will get benefits

The rate of variable allowance given to the workers employed in various scheduled jobs of the Union Ministry of Field, Labor and Employment has been increased from 1st April, 2021. About 1.50 crore workers will benefit and benefits will be provided with immediate effect: Union Min S Gangowar pic.twitter.com/pqBbFAGned

In this regard, the Chief Labor Commissioner told DPS Negi, “The monthly allowance allowance has been increased from Rs 105 to Rs 210 for the employees associated with various scheduled employment in the Central Government.” The ministry said in a statement that it has notified the revised variable DA from April 1, 2021. The statement said it would benefit workers involved in various scheduled work of the central government at a time when the country was facing a second wave of the Kovid-19 epidemic.

Union Labor Minister Santosh Ganguly said, “The move will benefit about 1.50 crore workers in the country who are involved in various scheduled employment of the central government. The increase in variable DA will help them in the difficult times of this epidemic.”

The variable DA is revised based on the average consumer price index (CPI-IW) for artisans compiled by the Bureau of Labor. The average CPI-IW variable DA from July to December 2020 has been used to revise.