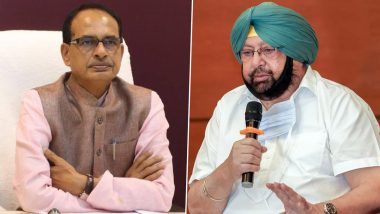 Many families living in different cities and villages of the country have been devastated by the Corona epidemic. If any member of the family dies, only the earning member of the family dies. Covid-19 (Covid-19) created the shadow of parents from many children. In such a situation, now the state governments had a hand in helping these affected families. Madhya Pradesh (Madhya Pradesh) Chief Minister Shivraj Singh Chouhan on Thursday announced that the state government would provide a grant of Rs one lakh to the families of those who lost their lives in the second wave of the state’s corona. He made the announcement during talks with BJP MLAs. He said I am telling MLA friends today that we are making another arrangement today. Under this arrangement, one lakh rupees will be given to the family who died due to Kovid-19. Read more- Madhya Pradesh: Violators of curfew in Datia and Vinde have been punished for snake dancing and frog racing, see video.

Shivraj Singh Chauhan said that above all there was trouble in his house. We cannot live with empathy alone. They are our own people. Their pain is our pain. They said we tried (to save them), but we couldn’t save. The family was affected. However, those families will be given one lakh rupees as ex gratia.

The State Government and we stand firmly with the affected families in the State. # COVID-19 For this reason, the family in which someone died in this second wave will be given a former gratia of one lakh rupees. #Mphfitscorona pic.twitter.com/G4tBRJ3TPs

The Punjab government has also announced-

The affected people will also be eligible for a grant of Rs 51,000 under the Ashirwad scheme from July 1 and will be entitled to free rations under the state smart ration card scheme and coverage under the Sarabat Sehat Bima Yojana. Arrangements will be made for orphans up to the age of 21: CMO of Punjab

The Punjab government on Thursday decided to provide dignified social security pensions and free education to orphans and families whose members lost income during the Kovid epidemic until graduation, according to an official statement, Chief Minister Amarinder Singh said. Ensure free education in government institutions. He said it was the duty of the state to be the guardian of such children who had lost both their parents to the Kovid-19 epidemic.

Singh said the affected people would be eligible for Rs 51,000 under the Ashirbad scheme from July 1 and they would get free rations under the state smart ration card scheme and they would be eligible for the health insurance scheme. Earlier, under the Ashirwad scheme, poor families were given financial assistance of Rs 51,000 for their daughter’s marriage and under the ‘Sarabat Health Insurance Scheme’, they received cashless health insurance cover of Rs 500,000 per family per year. The Chief Minister said after the high-level Covid review meeting that the state government would assist the affected family members in finding suitable jobs under the ‘House-to-House Roger Te Baipar Mission’.

Orphans will be provided relief till the age of 21 years. Singh said that in families where the earner has died, relief will be provided initially for three years and then the situation will be reviewed and they will be expanded where the situation is worse. The Chief Minister also announced the formation of a monitoring committee to review the progress and relief arrangements in each case, which will be headed by the Minister for Social, Security and Women and Development. He said the committee would meet at least once a month.