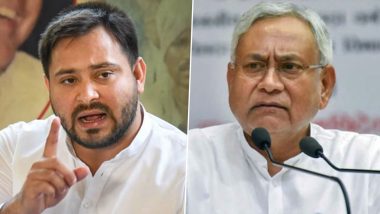 Patna: The scattering in Bihar politics has now reached ‘fungus’ and ‘Chinese virus’. On Wednesday, the state’s main opposition party, the RJD, called the Nitish government a “fungus” and said the BJP had not delayed replacing RJD leader Tejaswi Yadav. The BJP called Tejaswi a ‘Chinese virus’. RJD leader and former deputy chief minister Tejaswi Yadav has targeted Nitish Sarkar by tweeting from his Twitter handle, citing a media report.

Here, the BJP, which is involved with the government, immediately retaliated against Tejaswi’s statement. BJP OBC Morcha national general secretary and spokesperson Dr Nikhil Anand retorted, “Tejaswi Yadav is surprised. He tweets to Chief Minister Nitish Kumar Jit and calls him a fungus. What is Tejaswi himself? Is there a Chinese virus?”

Giving advice, Nikhil said that the central and state governments have done a good job together, which would not be right to meet only with opposition. He said, “Tejaswi Yadav can habitually give political speeches, but nowadays he is just getting used to political nonsense.