China is rapidly installing radar along the 3,488 km long Line of Actual Control (LAC). The LAC in East Ladakh between India and China has remained deadlocked for eight months. 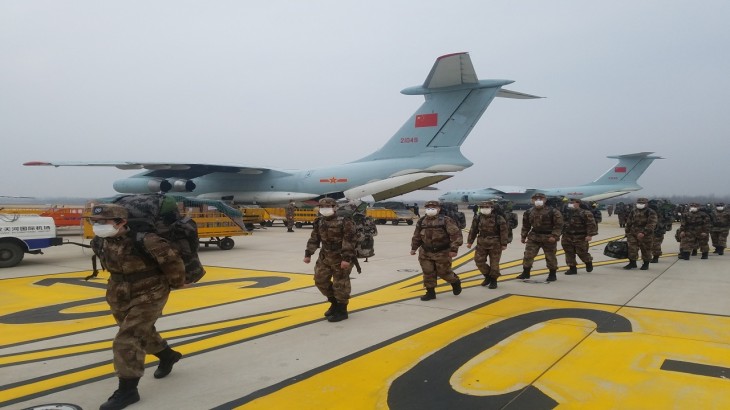 There is also a gathering of PLA soldiers. (Photo Credit: News Nation.)

China is engaged in talks with India to resolve the border dispute. Meanwhile, China is rapidly installing radar along the 3,488 km long Line of Actual Control (LAC). The LAC in East Ladakh between India and China has remained deadlocked for eight months. Both countries are engaged in military and diplomatic negotiations to resolve the border dispute. A total of eight rounds of talks have been held between the forces of the two countries at the Corps Commander level and the ninth round of talks is to be scheduled very soon. This conversation between the two countries is going on to remove their troops from forward areas and maintain peace.

Radar is being installed from Ladakh to Sikkim
Meanwhile, apart from aggressively developed infrastructure, now China has started putting radar from Ladakh to Sikkim region. Top sources said that a medium-sized building and a watch tower have been reported in Yicheng. The number of installed radars has also increased from three to four, including one JY-9 radar, one JY-26 radar, one HGR-105 radar and one JLC-88B radar. In Pali and Fari Kyrang La, which is opposite Sikkim, the radar site is located two kilometers west of Kyrang La and consists of four radars.

Establishing surveillance facility
The top source said, “The development of infrastructure in Yamdrok Tso has been seen in the surveillance facility, which is opposite to that of central Bhutan.” Kuona Electronic Warfare Station is about six kilometers north-east of Tasona. The site has three radomes, three radars and five support buildings. Infrastructure has been developed at the monitoring facility located 2.6 km northwest of Tasona Deege Heli Base. Sources said that a radome site is located six kilometers southwest of Kitchen Tsho. This includes radome, control building and antenna mast within the perimeter wall.

India has a sharp eye
The Kyomo Dej radar site consists of a two-story building, a control building and a middle building, all of which are surrounded by a perimeter wall. The source said, “JY-24 radar is deployed on site.” In addition, China is aggressively developing infrastructure along the Line of Control. China has developed infrastructure near the disputed sites of LAC, Karakoram Pass and Rechin La. However, India is also keeping a close watch on the aggressive action going on the border from China.

Follow these home remedies to get rid of throat infusion (mumps)

Rann Star and Bal Bhavan in the quarter finals of Ganaur...

Aishwarya Rai tells Rekha, mother will be surprised to know the...

When jeo Biden mentioned his relatives living in Mumbai when Biden...

Jaggery is very beneficial for our health, know how