The four terrorists who were killed were in contact with Rauf Lala, brother of Jaish kingpin Masood Azhar in Pakistan. not only this. Life-saving medicines and other equipment, including digital mobile radio (DMR) recovered from him, were manufactured in Pakistan. 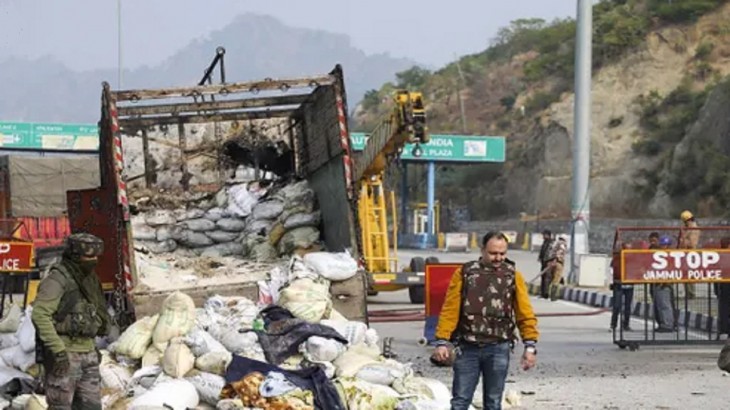 The message is being sent on DMR. (Photo Credit: News Nation.)

The evidence that the security forces have found after the Nagrota encounter is reinvigorating Pakistan sponsored terrorism. The biggest thing that is coming out is that the four terrorists who were killed were in contact with Rauf Lala, brother of Jaish kingpin Masood Azhar in Pakistan. not only this. Life-saving medicines and other equipment, including digital mobile radio (DMR) recovered from him, were manufactured in Pakistan. Text messages received from radio are also blaming Pakistan for spreading terror in India. This message says that the terrorists were in contact with Pakistani handlers even during the encounter.

Was taking instant information on DMR
The investigation agency has found DMR of a Pakistani company from the terrorists. The terrorists were messaged on the DMR, ‘Where to reach. What an atmosphere There is no problem. The terrorist replied, ‘2 o’clock’. All these chats are in roman laters. The agency suspects that these messages have been sent from Pakistan’s Shakargarh. Meanwhile, these terrorists said to have infiltrated and where the truck is sitting is being investigated. The truck coming to Jammu from Samba had cut the toll on Saror toll plaza, which is about 65 km from Nagrota Ban toll plaza, at 3.45 minutes. The truck took about an hour to reach the toll from Saror and the encounter started at around 4.45 minutes.

Terrorists were against big terror attack
According to intelligence agencies, MPD-2505 makes digital mobile radio by Pakistan-based company Micro Electronics. Along with this, a wireless set and a GPS device have also been recovered, whose investigation has revealed that all these devices have been taken from Pakistan. After crossing the international border and reaching a predetermined point on the national highway south of Samba, the militants were heading towards the valley. It is clear from the recovery of weapons in large quantities that they came with the intention of a major attack in the valley. The security agencies also suspect that perhaps these weapons have been delivered earlier through drones.

Also read: ‘Pakistan is the only obstacle to restoring peace in Afghanistan’

Rauf Lala was seen in Shakkargarh
According to intelligence information, Rauf Lala was seen a few days ago at Samba in Jammu and across the Hiranagar sector in Shakkargarh, Pakistan. On 31 January, Rauf Lala had conspired to infiltrate the terrorists in the same way, but the security forces surrounded and killed him near the Bana toll plaza. Sources say that the terrorists entered Thursday night by crossing the drain near the Samba sector on Amavasya night. The terrorists crossed the border, taking advantage of the darkness. Let us know that Pakistan has been troubled since the removal of Article 370 from Jammu and Kashmir on August 5, 2019. He is trying to create unrest in Kashmir.