The team successfully rescued the baby elephant and took it out of the well safely. Let us tell you that this case is of Panchpalli village located in Dharampuri district. According to the report of the news agency ANI, this elephant baby accidentally fell into a well on Thursday night. 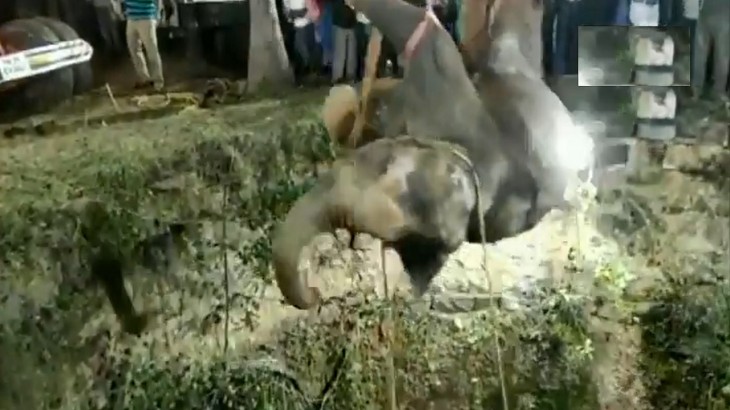 In Tamil Nadu, an elephant fell into a 50-foot deep well, after which it had to work hard for 16 hours to save the elephant, although this rescue team successfully saved the elephant child and took it out of the well safely. . Let us tell you that this case is of Panchpalli village located in Dharampuri district. According to the report of the news agency ANI, this elephant baby had accidentally fallen into the well on Thursday night.

During this time, when a farmer heard the sound of the elephant’s baby falling in the well, he immediately reached there. He saw that a heavy animal has fallen into the well, but within a short time he came to know that the animal dropped in the well was an elephant child. After this, this farmer immediately informed the administration of this incident. On receiving the news, the administration team came into action and immediately sent a rescue team to remove the elephant’s baby from the well.

Brilliant work by the forest team who rescued a sub adult female elephant after hours of operation, and also supplied food during the operation.

The elephant fell into a 50 feet open well in Dharmapuri, TN.

Kudos to the Elephant spirit👍 pic.twitter.com/sqi201Uagl

Mercury below normal in Punjab and Haryana, Delhi’s coldest in 14 years

If you are troubled by constipation, then know how to get...

Nazia Nasim became a millionaire as soon as she gave the...

If you take care of these things then teeth will remain...

Make this syrup at home, cough will easily go away

Get rid of these problems by consuming tea during winter

Mercury below normal in Punjab and Haryana, Delhi’s coldest in 14...

The second phase of the Malabar exercise begins from today, QUAD...