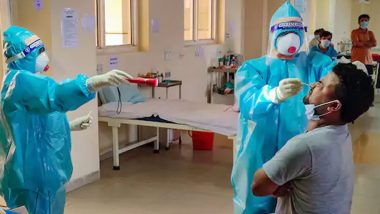 Ghaziabad, May 9: Two people have been arrested for allegedly taking money on the pretext of providing ventilator ICU beds to Kovid-19 patients at Ghaziabad Hospital near Delhi. GT Road Kotwali police and SWAT workers arrested the two, police said on Saturday.

According to a senior official, the accused have been identified as Mayank (24) and Pradeep (26). Police recovered Rs 1.99 lakh from them. Police said Mayank was the ringleader of the hijacking gang and admitted that he cheated people with his accomplices Chirag and Amit. He said Chirag and Amit were doctors at the hospital and inquired about the health of the patients. Read more: Coronavirus update: 26,847 new cases in UP, 298 deaths, 34,731 patients discharged

According to the police, another person used to take advance money in a fake account created in the name of the hospital to recruit patients in Gautam version. He said Chirag, Amit and Version get 30 per cent commission. They will be caught soon