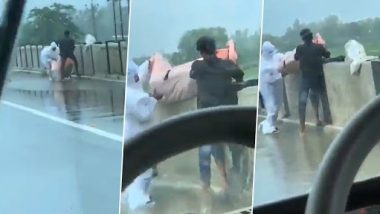 Despite strict instructions from the Yogi Adityanath government against the disposal of dead bodies in rivers and other water bodies, a video has surfaced of a seaweed patient being dumped in a river. A case has been filed against the family, police said. The video of the incident was apparently shot by some people who were driving in Balrampur district on May 26. As seen in the video, two men, one of whom is in a PPE case, were seen carrying a body on the bridge. The man was seen moving his body in a PPE suit over the Rapti river. Perhaps he was trying to get the body out of the bag. The chief medical officer of Balrampur confirmed that the body was that of a Kovid patient and relatives were trying to throw it into the river. Read more: Bihar: Body found in Ganges river, investigation is underway

A case has been filed against the relatives of the deceased and the body has been handed over. “Preliminary investigation revealed that the patient was admitted to the hospital on May 25 and died three days later. The body was handed over to his relatives as per COVID protocol. The relatives dumped the body in the river. We have filed a case and strict action will be taken.” Balrampur Chief Medical Officer VV Singh said.

In UP’s Balrampur district, a video of a man’s body being dumped into a river from a bridge has surfaced. pic.twitter.com/DEAAbQzHsL

The CMO of Balrampur said that the body of the COVID patient has been handed over to the family under the COVD protocol and a case has been filed against those who dumped the body in the river. Investigation is underway.

An official claimed that the pedestrian filmed the whole incident. “The person who shot the video has shared it on social media.” After which the incident came before the people and action was taken. Let us know that earlier this month, hundreds of bodies were washed away on the banks of the Ganges in Bihar and several places in Uttar Pradesh. After which the Chief Minister asked all the District Magistrates to ensure that the bodies should be buried properly.