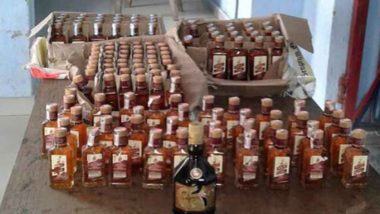 Patna, May 25 (IANS)| The alcohol mafia is active despite the state government’s lockdown to stop the second wave of the Kovid-1 ep epidemic in Bihar. A new case of liquor smuggling came to light in Muzaffarpur district on Tuesday, when police seized more than 25 cartons of Indian-made foreign liquor (IMFL) in a temporary box under a tractor-trolley. Muzaffarpur police seized a tractor-trolley during a raid in Bhakhanpur village under Ahiyapur police station. Read more: Bihar: 4 goons abducted, gang-raped, 1 arrested in Saharsa

“We received a notification about a shipment of liquor being smuggled in a tractor trolley. We then went to the village and saw a tractor coming from the opposite direction.

“During interrogation, the driver of the tractor revealed the name of the owner of the consignment. Both the driver and the owner have been arrested. Further investigations are underway to find those involved,” Kumar said. The sale of liquor has been banned in Bihar since April 2011.