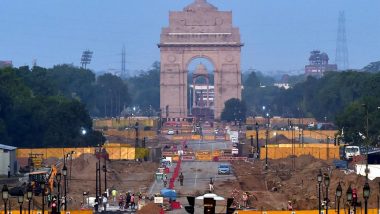 The Delhi High Court will decide on Monday whether to allow work on the Central Vista project to continue during the ongoing Corona epidemic. A bench of Chief Justice DN Patel and Justice Jyoti Singh heard the petition seeking stay of construction work during the COVD-19 pandemic. The bench has fixed May 31 for giving its verdict in the matter. The Delhi High Court on Saturday released the list of reasons. The court reserved judgment on May 1 in a joint petition filed by translator Anya Malhotra and historian and documentary filmmaker Sohail Hashmi. Read also – Central Vista Project: The new residence of the Vice President and the Prime Minister will be ready by 2022.

Under the Central Vista project, a new parliament building, a new residential complex is envisaged, which includes the residences of the Prime Minister and the Vice-President, as well as several new office buildings and offices of the Central Secretariat. Apart from the construction, a large ‘Defense Enclave’ (Defense Circle) will be prepared for the top officers and employees of the defense sector under the project.

On the other hand, 33.9 percent of the respondents said that it was not right for the government to move the project in the midst of the Kovid crisis. The survey found that 29.5 per cent in urban areas and 35.7 per cent in rural areas felt it was not a good decision, with a total of 24.4 per cent people not considering it appropriate to comment on the issue. The survey was conducted between May 23 and May 27 with 12,070 people across the country.