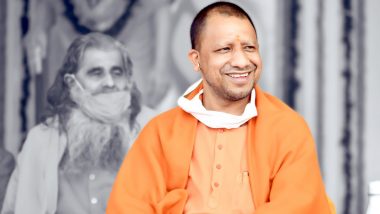 Lucknow: Uttar Pradesh (UP) Additional Chief Secretary Information Navneet Sehgal said that in the last 13 days in the state under the leadership of Chief Minister Yogi Adityanath (Coronavirus) aggressive testing, tracking and treatment strategy. In addition, the number of new cases is declining rapidly. More than 2.50 lakh covids are being tested every day in the state. He said that people are being informed about the symptoms of Kovid by going door to door with surveillance. So far, more than 1 crore people out of the 24 crore population of the state have been taken through surveillance. In ten days, more than 75,000 cases of corona were reduced in the state: CM Yogi

Shehgal said migrants from outside the state are being screened by monitoring committees following the Kovid protocol and they are being sent to separate centers. He said quarantine centers have been set up at 1933 district level, 220 tehsil level, 19 block level and 254 gram panchayat level. 25,820 people have been kept in these segregation centers and 49 people have been sent to hospitals. He said that the monitoring committee was taking information from the people about the symptoms of covid by the monitoring committees and the RRT team was examining the symptomatic people. He said that the World Health Organization has appreciated this unique campaign conducted by the UP government in the villages. Shehgal said that under the direction of the Chief Minister, food is being provided to the people in the community areas through community kitchens like Rehri, Patera, Thala, Sramik, Palladar etc., where the government is running 227 community and 76 community kitchens through NGOs. He said that more than 2 lakh food packets were distributed through the community kitchen yesterday.

Sehgal said the number of oxygen beds for Kovid patients is being increased in the state. In this continuity, a campaign is underway to create 20-20 oxygen rich beds in each CHC. 5000 oxygen concentrators have been sent to all the districts and orders have been issued to purchase more than 17000 oxygen concentrators. He said the hospital was supplied with more than 1,000 metric tons of oxygen yesterday. He said district magistrates in all districts have been instructed to identify a reflector in each district to ensure oxygen supply to patients living in isolation, such as home isolation patients. He said that the Chief Minister has directed for the appointment of nodal officers in all the hospitals, who will provide information about the patient to the family of the admitted Kovid patient. Shehgal said the statewide partial coroner curfew has had positive results. Necessary services such as partial coronary curfew, vaccinations, industrial activities, medical work, etc. remain unchanged. During the partial corona curfew, special cleaning and fogging operations are being carried out in towns and villages across the state.

He said industrial units in the state are moving fast. The industrial unit is hiring workers. Covid help desks have been set up in these industrial units. In addition, the Covid Care Center has been established in an industrial organization with more than 50 employees. So that the staff working there can get timely treatment.

Shehgal said that the state government was committed to the interests of the farmers and the process of procuring their crops from the farmers at minimum support price was being expedited following the Kovid protocol. The wheat collection campaign will run from April 1 to June 15, 2021. So far, 24,1,6991.40 MT of wheat has been procured from 55 lakh farmers. He urged the people to avoid wearing masks, washing hands with sanitizer and soap and going to public places. Additional Chief Secretary Medical and Health Amit Mohan Prasad said that as per the directions of the Chief Minister, the examination capacity is being continuously increased while working on a large number of examinations in the state. In the last one day, a total of 253,977 samples have been tested, more than 01 lakh 09 thousand have been tested through RTPCR.

He said the recovery percentage in the state has increased from Covid-19 to ৮ to to. A total of 4,39,06,533 samples have been investigated in the state so far, the highest in the country. He said that in the last 24 hours, 1,77575 new cases of corona infection have been reported and 19,445 patients have been discharged from the infection. So far 13,59,676 have recovered from Covid-19. Out of the total 2,04,6586 active cases of corona in the state, 1,45,601 persons are in isolated condition, while other patients are undergoing treatment in public and private hospitals.